What Are Back Dimples? Myths And Facts

Back dimples are also known as dimples of venus. This name is taken from Venus which is the Roman goddess of beauty. It is also accepted by the medical community.

If You Don’t Have Back Dimples:

If you don’t have back dimples and want to create dimples on your back right above your butt, there is a method known as back piercing. In this method, you can create artificial back dimples by inserting jewelry into the back.

A needle or scalpel is inserted in the middle layer of the skin named the dermis to make a pocket. Using forceps, the piercer will insert an anchor with a post into the pocket. Finally, they’ll screw the jewelry “top” onto the post.

Who Do Have Back Dimples? 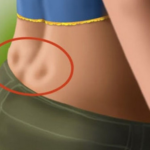 Dimples are generally considered feminine features. But there is no proof scientifically. There are many boys who also have some dimples. So, there is no dependence on genes.

Most of the people have two back dimples just above the butt. But, some are having one dimple on their back. These are known as Sacral dimples. These are also by birth. It is above the crease in the buttocks. These are similar but have also many differences.

Both of these are harmless and provide no damage to tissues. But, sometimes there may be a reason for a sacral dimple. It can occur due to many medical conditions such as:

The risk of having one of these spinal problems increases if one of the following is present near a sacral dimple at birth:

When the following things occur near the sacral dimple at the time of birth, then the risk of these spinal problems increases.

Sometimes, treatment is not a must thing to do for these two disorders. When a baby born with a sacral dimple, an ultrasound or MRI is being taken by doctors to check any issue.

There are many myths about back dimple that are very beneficial in sexual life.

It is a myth that women who have back dimples can orgasm more easily because back dimples are a sign of good circulation in the pelvic region.

There is another myth that women can orgasm just from having a partner push on the dimples. But the fact is that there is no evidence of these claims.

Back dimples occur because of ligaments that attach bone to the skin and they have no job with blood circulation in the area.

One claim that’s supported by some evidence is that men find dimples of Venus attractive in women. This may be a developmental inclination connected to pregnancy-related benefits, such as pelvic steadiness and the capacity to bear weight.

Back dimples are attractive and by birth indentations on the back, just above the butts. It is a feminine feature. They don’t have any harmful effects. But sacral dimple can be of any medical problem. For that, doctors prefer to take a BMI and ultrasound at birth.

Otherwise, back dimples are a sign of beauty for women.

If you don’t have back dimples and want artificial back dimples then there are many ways of it. Have a look at this

The pandemic outbreak has changed our outlook on various things, but...
Read more

The pandemic outbreak has changed our outlook on various...
Read more

Are You Sick or Anxiety: Key Signs Affecting Your Physical Health

If you ever been nervous about a high-pressure situation...
Read more

How to remove chloramine from water? Easiest ways

Overview Water is the basic need of life. Without water,...
Read more